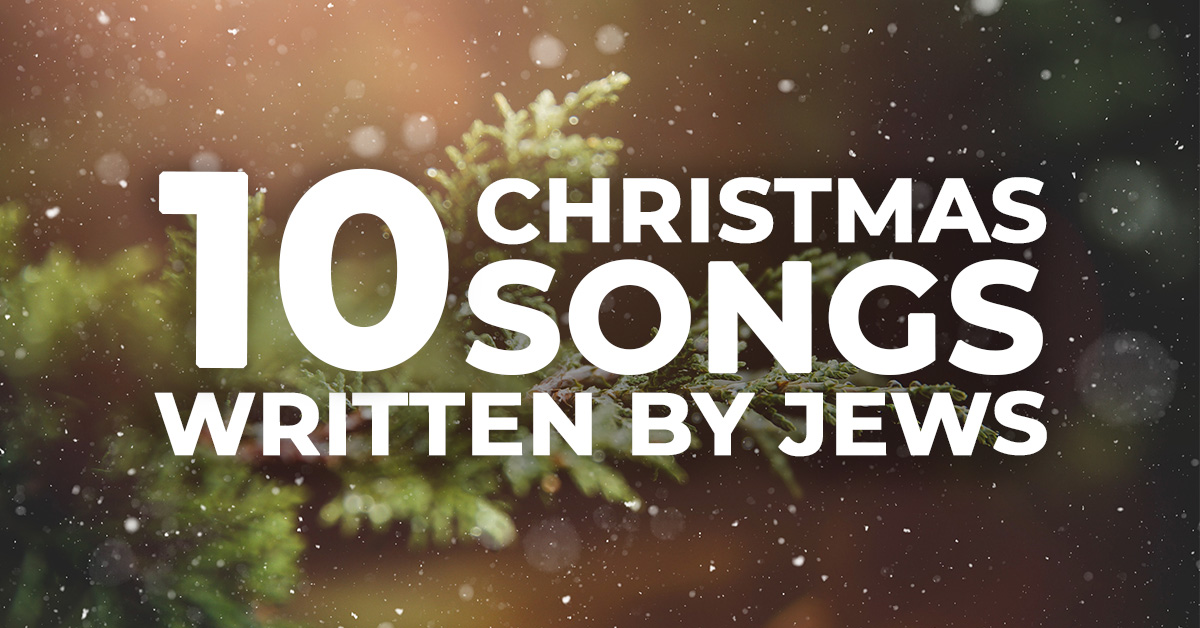 Jews tend to believe that Christmas has a big impact on the Jewish culture. However, most people are not aware how much Jews influence Christmas!

Here is a list of our favorite Christmas songs you didn’t know were written by Jews:

We all know the Christmas jingle ‘Winter Wonderland’ performed by Michael Bubblé, Dean Martin, Amy Grant, and many other amazing singers. What most people don’t know is that one of the co-writers, Felix Bernard, is in fact Jewish.
Felix Bernard was born in New York, and was a successful conductor, pianist, and composer. Amongst his most popular works are ‘Winter Wonderland’ and ‘Dardanella’.

2.Have Yourself A Merry Little Christmas – Ralph Blane, Hugh Martin

Ralph Blane, who was an amazing composer, co-wrote one of the most famous Christmas carols, which was part of a film musical from 1944, called ‘Meet Me In St. Louis’. Since then ‘Have Yourself A Merry Little Christmas’ was featured in movies, such as Die Hard, The Gremlins, The Nightmare Before Christmas, and many more.

Fred Coots, the co-writer of this Christmas hit, was another successful Jew, who impacted Christmas. He composed more than 12 Broadway shows and over 700 songs. After his co-writer came up with the lyrics to ‘Santa Clause Is Coming To Town’, it only took Coots 10 minutes to compose the skeleton of this world famous Christmas carol.

Both writers of this Christmas classic are Jewish. Sammy Cahn, born Samuel Cohen, and Jule Styne, born Julius Stein wrote ‘Let It Snow, Let It Snow, Let It Snow!’ 1945. The composers do not only have this hit in common. Both Jewish family were originally from in Eastern Europe, and immigrated to the United States when their children were still young.

5.It’s The Most Wonderful time Of The Year – Edward Pola, George Wyle

We all know this song from Ellen DeGeneres’ segment of ’12 Days Of Giveaways’, but have you ever thought about the people who wrote this jingle? One of the co-writers is Edward Pola. Edward Pola was an actor, radio- and TV producer, and a songwriter. He was born in New York to his Jewish parents who immigrated to the US from Hungary.

Do you know it’s Christmas, which is one of the best-selling singles of all time, was co-written by the singer, songwriter, author and political activist Bob Geldof. Geldof was born and grew up in Ireland with a Jewish grandfather.

Johnny Marks is famous for his many Christmas songs, including ‘Rocking Around the Christmas Tree’, ‘A Holly Jolly Christmas’, and ‘Rudolph The Red Nose Reindeer’. Many of his Christmas works ended up being great hits. What most people don’t know about the American songwriter is that he was in fact a Jew from New York.

The co-writer of Sleigh Ride, Mitchel Parish was born in Lithuania and immigrated with his Jewish family to the US at the age of one. The successful New York lyricist wrote, and translated songs to English. One of his works is the famous Christmas song ‘Sleigh Ride’.

The composer and lyricist of White Christmas, Irving Berlin, is considered one of the greatest song writers in American history. His father was a cantor in a synagogue in Imperial Russia until the Jewish family immigrated to the United States and moved to New York. There, Irving Berlin grew up and became a very successful composer and lyricist, writing and composing world famous songs and film scores.

Last, but for sure not least, we will go back to Channukah. Adam Sandler is known for his funny Channukah songs. In collaboration with Saturday Night Life writers Lewis Morton and Ian Maxton-Graham, Adam Sandler published a total of four Channukah songs. Each of the songs wishes the listener a Happy Channukah, and lists all possible public figures who are Jewish.