5 Things to do over Reading Week (In Addition to Reading!) 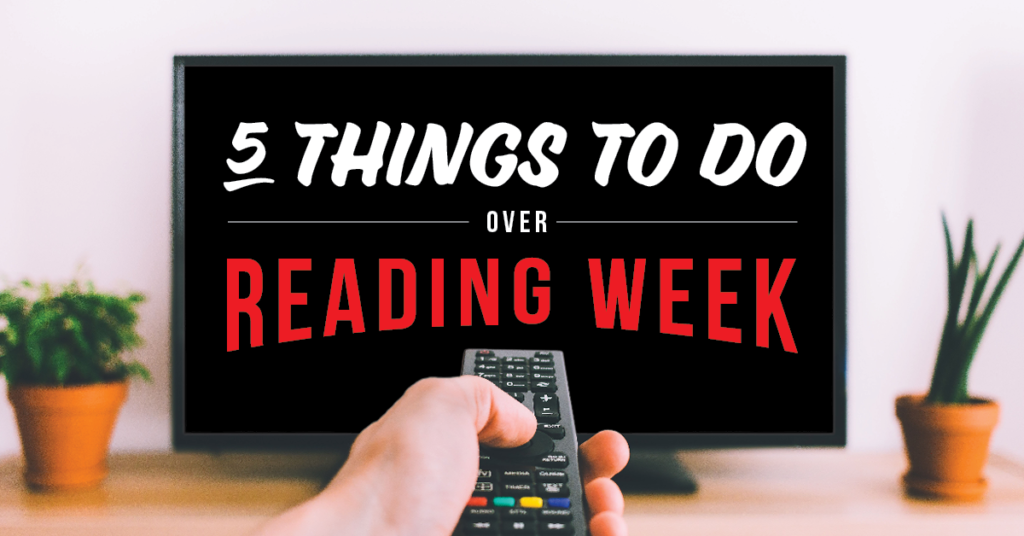 Although Reading Week is the best time to catch up on all your coursework and prepare for midterms, it’s also time for you to unwind and relax because you deserve it! After months of hard work, it’s easy to get carried away with school and focus less on yourself. Make this Reading Week all about balance.  Here are our top five suggestions of things you can do to de-stress this week.

GET OUT AND EXPLORE
via GIPHY

Spending hours upon hours in a classroom or in the library can be tiresome. The best way to totally unwind? Take a mini vacation! Something as simple as a day or two in Niagara Falls would do the trick. If you like to ski or snowboard, find some friends and rent an Airbnb at Blue Mountain. If you’re not into leaving your hometown, find something fun to do on Groupon! From a spa day to go-karting, you are sure to find something you like.

So many new Netflix series, so little time! If you have never sat in bed for hours binge watching a TV show with popcorn in hand, now is the time to try it. Our favourite though? The Marvelous Mrs. Maisel! Set in 1950s Manhattan, the show follows Midge Maisel, a young Jewish, recently separated mother of two, as she pursues her passion for a career as a comedian.  This award winning show is absolutely hilarious. You may even want to watch it with your bubbie. You’ll thank us later.We asked the Hillel Ontario staff what they thought were binge worthy shows, and here’s our list!

BRING OUT THE BOARD GAMES

When you are busy with school, a quick text or like is sometimes all you can manage. Unplug during Reading Week and bring everyone together for a fun games night at your place. Monopoly, Settlers of Catan, and Life are classics, and sure to be crowd pleasers. If you don’t want to have the hassle of hosting at your place, unleash your competitive side and unwind with a hot drink or a glass of wine at Snakes and Lattes. You can’t go wrong.

MAKE A PLAYLIST
via GIPHY

Remember our Out of Sync Spotify playlist? It had all the best hits to make you get up and sing your heart out. With midterms coming up, make a playlist to help you get in the study zone. Spotify has great pre-made playlist, but we recommend making your own. A few of our favourite artists that we like to play in the office while we work are Ed Sheeran, John Mayer and James Bay.

While having the cold winter air hit you in the face while shovelling your driveway, you’re bound to start dreaming about warmer days.  Put those winter blues away and start thinking about summer vacation! How about a free trip to Israel? If you haven’t registered for Birthright yet, what are you waiting for? The trip will be one of the most unforgettable experiences of your life. You will be immersed in Israel’s history and culture, while also trying delicious Israeli food, learning about Judaism, and making friendships that  will last a lifetime. 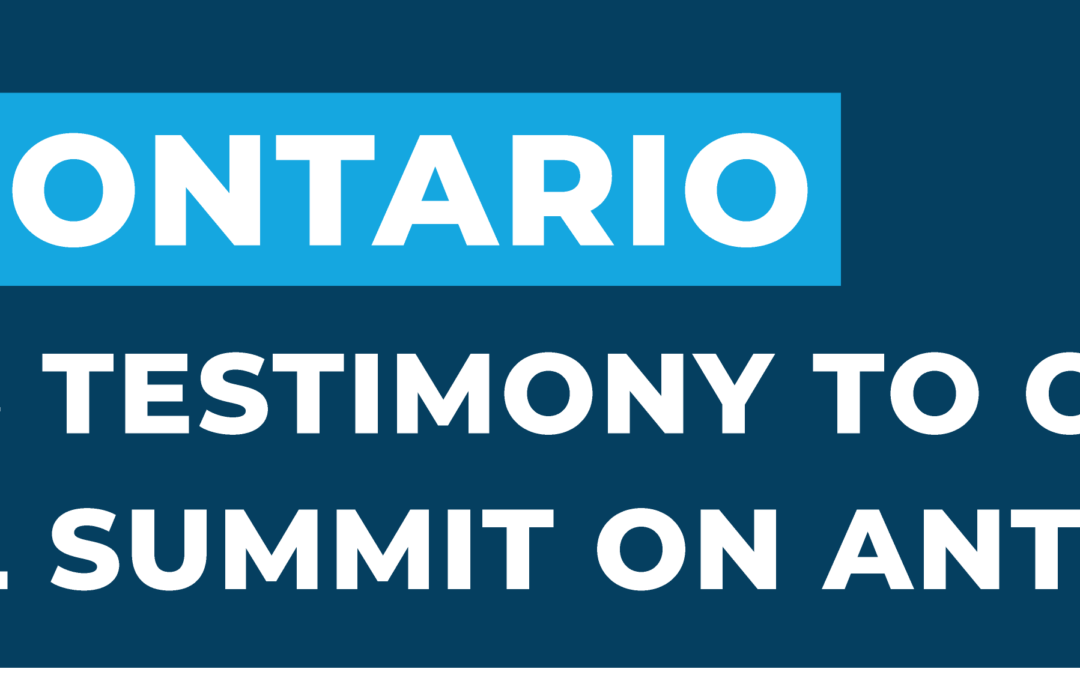 Today, the Government of Canada held a National Summit on Antisemitism.

Convened by The Honourable Bardish Chagger, Minister of Diversity and Inclusion and Youth, and The Honourable Irwin Cotler, Canada’s Special Envoy on Preserving Holocaust Remembrance and Combatting Antisemitism, today’s Summit sought to provide parliamentarians and policymakers a comprehensive understanding of antisemitism in Canada, and identify concrete steps to address the issues facing the Jewish community.

Below is the full transcript of Hillel Ontario’s testimony.

My name is Jay Solomon, and I am the Chief Communications & Public Affairs Officer for Hillel Ontario.

Supporting approximately 14,000 Jewish students at nine universities across the province, Hillel Ontario – now the largest Hillel in the world – empowers students to make an enduring commitment to Jewish life, learning, and Israel.

This spring, Israel and Hamas – labelled a terrorist group around the world, including in Canada – squared off in the largest military conflict the region has experienced in some years. For both Israelis and Palestinians, the fighting was painful and distressing.

In the wake of these tensions, around the world, and certainly here in Canada, supporters of Israel have been subjected to vile and sometimes violent vitriol. And, even more concerning, Diaspora Jews have been attacked – verbally and physically, online and in person – simply for being Jewish and regardless of their feelings about or connection to Israel.

As an illustration, I thought I would share just a few recent examples of some of what Jewish students have been subjected to on campuses in Canada in the past few months. At Wilfrid Laurier University in Waterloo, a student posted a video on social media mocking the stabbing of Israelis. Near Western University, in London, a Nazi flag appeared at an anti-Israel rally. At McMaster University in Hamilton, a Jewish student was bullied online for showing support to Israel. And, on the personal social media pages of countless Jewish students across the province, blue squares and other expressions of concern about antisemitism were peppered with comments condemning Israel, levelling personal attacks at the students who posted them, and, in some, threatening physical violence.

And then there’s the issues posed by student unions and faculty associations who in many cases have replaced informed debate and well-meaning dialogue – the cornerstones of university education – with one-sided rhetoric condensed to 20 second videos and 140-character tweets in an attempt to boil hundreds of years of culture and history into soundbites that are inevitably biased and simplistic. As a recent example, a student group at Western University published incredibly offensive social media commentary calling on the University Student Council to eliminate “all pro-Zionist narrative” from the campus. Another illustrative example involves the President of the University of Toronto Faculty Association who is alleged to have spoken about an “entitled powerful Zionist minority” at a recent academic panel.

These, and other, recent examples of antisemitism are as disturbing as they are unacceptable. Year over year, the Jewish community is the most targeted religious minority for hate crimes in Canada. And, these recent incidents underscore the important efforts that lay ahead – work that must include critical education on antisemitism, and a renewed commitment to relationship-building based on shared values and experiences.

But, there’s another category; and it is one that has been taboo to speak of in many circles for too long.

The unpopular reality is that some of the world’s worst antisemites (who, it just so happens, are among Israel’s most virulent detractors) embrace this label with malice and intentionality. And it is this type of poisonous, malevolent antisemitism that has been on full display recently.

As the largest affiliate of the global Jewish student movement, Hillel Ontario’s student leadership and campus professionals have been working around-the-clock to support students who have been shaken by a tsunami of antisemitism online and on campus.

We have communicated directly with university presidents, provosts, and student union leaders to ensure Jewish students were protected, and that their rights would be respected. We lodged official student code of conduct complaints and filed police reports when Jewish students were targeted; reported countless antisemitic posts on social media; provided personalized pastoral counselling; compiled educational resources and offered learning opportunities for those wanting to learn more; and provided space for students to process their own feelings, emotions and perspectives.

But, the truth is, our efforts on campus alone are not enough. And, we need your help.

We need our nation’s leaders to come together to forcefully, consistently, and unconditionally condemn antisemitism – in all its forms – and to take proactive steps to secure the safety and security of the Jewish community of Canada, today and for the years to come.

We need formalized learning opportunities across the educational sector – for teachers, professors, administrators, equity officers, student government leaders and those charged with securing and protecting the campus community – to ensure historical and modern perspectives on antisemitism’s manifestations, as well as ways to combat them, are entrenched in and integrated into diversity, equity and inclusion and anti-oppression programming. Education on the perils of antisemitism must become a natural part of DEI and anti-oppression efforts on university campuses.

As a society, we must publicly acknowledge the overlap between antisemitism and anti-Zionism, and recognize that, far too often, anti-Zionism is used as a convenient shield behind which antisemites stand.

As advocates for the Jewish community, we know that it is acceptable to criticize Israeli policies, or voice legitimate concerns for the welfare of Palestinians. Like any other liberal democracy, Israel is not immune from legitimate criticism.

But, we also know that fair-game critiques end when Jews are denied the universally held right to collective self-determination; when Jews are held collectively responsible for the actions of the Israeli government; when antisemitic tropes dating back centuries are used to target Jews and Jewish communal institutions; or when comparisons are drawn between Israel and the horrors of the Holocaust.

We need Canadian leaders to stand with the overwhelming majority of Jewish Canadians in a definition of antisemitism that includes the delegitimization of the Jewish state. Like any other minority group, the Jewish community’s definition of our oppression should be defined by the majority of our community, not fringe elements within it or outside of it.

We need our nation’s leaders to counter efforts to promote the divisive and discriminatory Boycott, Divestment & Sanctions campaign against Israel, and work to promote dialogue and relationship-building opportunities based upon shared values.

On behalf of Hillel Ontario, our students, professional staff and lay leadership, I want to offer my sincere thanks to the Government of Canada for convening this National Summit on Antisemitism, and for inviting me to participate in today’s proceedings.

In the days and weeks ahead, Hillel Ontario stands ready to support the important work that lies ahead; to work in conjunction with the federal, provincial and municipal governments, and with university leadership, to support Jewish students in the ongoing fight against antisemitism. 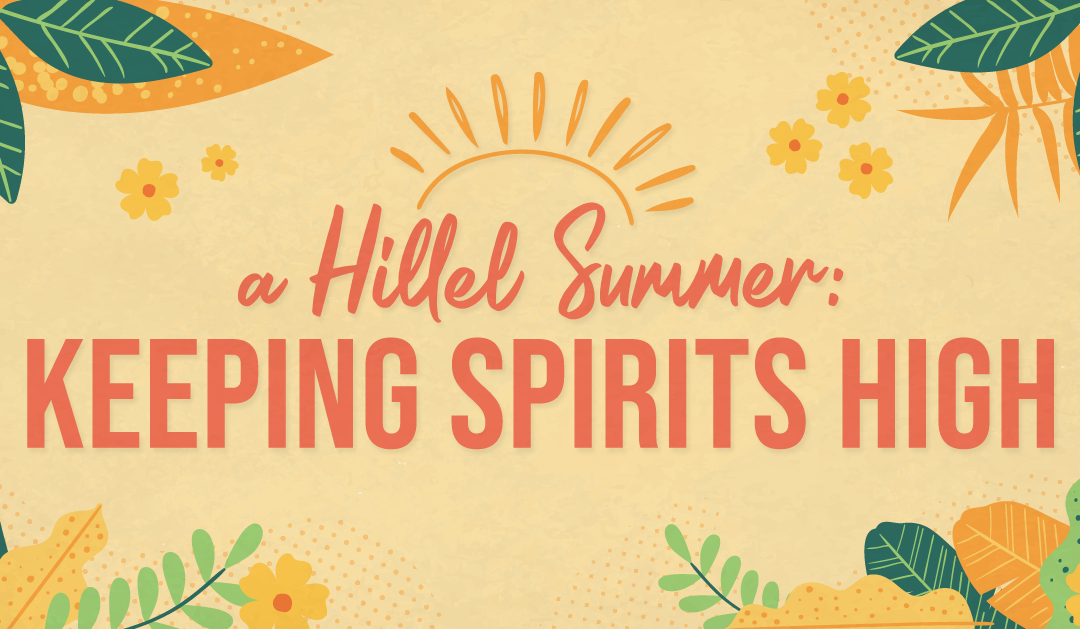 My name is Stacey Ianco and I am going into my third year at Ryerson’s Ted Rogers School of Management. Hillel has been my home away from home, and has helped me embrace my Jewish culture, enhance my Jewish identity, and meet new people..

This year has been like no other we have experienced. Throughout these challenging times, I have felt lucky to have remained connected with my fellow students – especially through my involvement in Hillel.

Especially given the year we just experienced, Hillel has been vital to my Jewish campus life. That’s why I was so excited to hear that Hillel programming was going to continue during the summer. 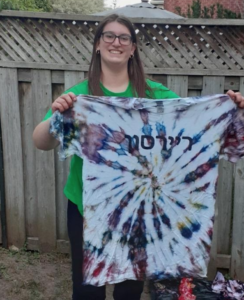 Hillels Ryerson, York and UofT teamed up to create the Summer in the 6ix program, and I knew I wanted to participate.

In addition to receiving some really cool swag, Summer in the 6ix connected me with activities and programming I

could engage in alongside (virtually) other Jewish students across the GTA. We baked and decorated delicious sugar cookies over a Hillel Zoom meet, sharpened our knowledge and competed with other Hillel students in bi-weekly trivia games, and customized our Hillel t-shirts with tie-dye. In a summer characterized by distancing and separation, Hillel brought me closer to my community.

To be sure, this has been a difficult year for so many reasons. I am so appreciative of all that Hillel does for Jewish students across the province. Especially this year.

I will continue to be an active member of Hillel for all my years of university and the future. Hillel has given me the confidence I need to be a proud Jewish woman and has enhanced my university experience in many ways.

I look forward to being able to create more special events to include and connect every Jewish student in Ontario for many years to come.