Masha Jewski is not your average Matryoshka. While other Russian dolls wear flowers, Masha wears two shades of blue, the color of Hillel Ontario, UJA Federation of Greater Toronto, and other Jewish and Israeli organizations, to welcome Jewish students from different communities. Masha herself is from Thornhill and studies at York University. However, she is often seen with students not only from York, but from Ryerson, UofT, Western and Waterloo. Masha grew up wearing Adidas Tapochki and eating her Babushka’s borscht. She also remembers the taste of Challah and Israel’s Milky Pudding. These are as familiar and comforting to her as Canadian Maple Syrup. She is a three-dimensional Russian doll with three different cultures. In this interview, Hillel Ontario speaks to Masha about her blended identity and what it means to be a Jewski.

Why do you consider yourself Jewski? Isn’t it sufficient to call yourself Russian Jewish or Israeli?

I consider myself all these things. I love Israel, I love Russian culture, and I love Jewish culture. Yet Jewski is a cultural phenomenon which is more than a mere blending of two cultures. I’m a Jewish girl who grew up in Israel speaking more than just Hebrew. I spoke a lot of Russian and felt the Russian culture as well as the Israeli culture at home, though neither of my parents are from Russia or Israel. I believe that Jewski is a unique result of Russian and Jewish history which gives me the cultural understandings I have today. Jewski isn’t a label meant to form a concise group for me to call my own, rather, it’s a heritage which I like to share with others.

Can you tell us more about your family and your background?

My parents studied in Novosibirsk, Russia, where they met and then left to Israel at a young age, near the end of the Soviet Union. My father is from Moldova and my mother is from Ukraine. I am the oldest of three sisters, one of which goes to Western and the other who goes to Waterloo. The three of us grew up in Netanya with our parents, where we spoke Russian at home. My mom would make us kotletki, pelmeni and syrniki after school. Then we moved to Canada when I was seven. We moved between places in Toronto for a bit, but finally settled in Thornhill where we’ve been living since.

When did you start to realize that Jewski was “a thing”? That people have a similar background to you?

Perhaps if you grew up in Thornhill you would know many Jewskis, but when I moved to Toronto, I didn’t live in a Jewish community right away. Growing up in Toronto, I met some young people who spoke Russian. I felt welcomed and got to know their background, and when I understood that they almost had the same family history as me I was surprised. When I moved to Thornhill, I began to feel a sense of community among people with families like mine. When I started studying at York, I met and connected to Russian speakers who are not Jewish, who are Jews of other backgrounds, Canadians, and others.

Were there some not-so-obvious cultural phenomena you noticed among yourself and other Jewskis?

One thing I wish people talked more about was language. I find that if you’re a lucky Jewski, you may speak all three languages– Russian, Hebrew and English. I tend to envy that, because I forgot Hebrew when I got to Canada and now speak only Russian and English. Sometimes, I wish I could watch shows like Hatufim or Ramzor, or simply speak to Israelis I meet here in Thornhill or in Toronto. Other Jewskis may have the opposite situation where their Russian is rusty or gone, but they are excellent Hebrew speakers. And I think once people realize Jewski is an open community, we’d be able to help each other retain our heritage language and cultures.

How do you celebrate your culture now? What do you do and what are your interests?

I just kind of do what’s fun for me. On my own, I like to watch Russian shows like Kukhnya and Interni. I get a great laugh out of those and get to keep my Russian language. I also watch Ramzor with subtitles, and it reminds me that I’m part of a larger Israeli culture. I love these shows as much as I love shows like The Office and Seinfeld. My family owns a cottage near Peterborough. We drive there almost every weekend. There, we do Banya every Friday and come back inside to light the candles. I feel like I’m lucky to celebrate my heritage culture while seeing the traditional Canadians on the rural side, since we’re good friends with our neighbors there. When we stay back in Thornhill, I like to go with my mom to Cafe Landwer and order the Belgian Waffles. When my dad and sisters are around, we like going to Me Va Me.

You talk a lot about time with family, which is good. Where do you hang out with friends?

My friends take me to amazing places. I don’t know where to start. In May, a few friends and I were lucky enough to be on the same birthright trip. I have pictures of myself at the Western Wall from there. We also got to see the Golan Heights and Akko, and eat lots of schnitzel. I also came back from a trip with my friends at Western University, where I got to meet more Jewskis. It’s amazing because I see a mix of people from my town of Thornhill and people I haven’t met before. We also spend lots of time in Toronto. This year we had a Yom Ha’atzmaut party which had tons of people. I got to dance a lot that night. We also had a Lag Ba’Omer party where I felt like I was in Israel again, but in Toronto. And we have so many more things planned for this year… I’m sure we can do Banya together and go to eat. What I love about hanging out with my Jewski friends is that we can do so many different things together. I can party or relax at the fire, I can be 7000 miles away or right here in Thornhill. I am never bored, and I always feel at home.

Thank you Masha. Can we ever join you with your Jewski friends? Where can we see what you’re up to next?

Of course you can join us! You can find our Jewski group on Facebook. And if you ever want to see what we’re up to, just follow the hashtag #whereismasha on Facebook or @where.is.masha on Instagram. I really hope to see more new faces this upcoming school year.

Yonatan Koren is a 4th year Computer Science student at York. He enjoys being part of the Jewish community on campus and is eager to see it grow and welcome more students. 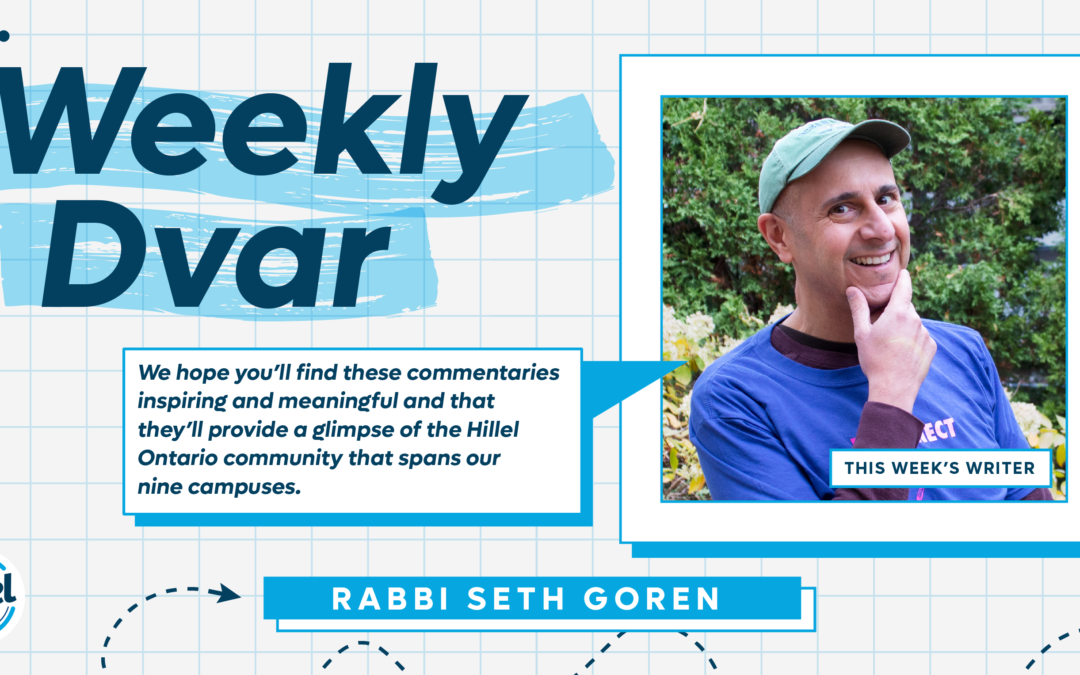 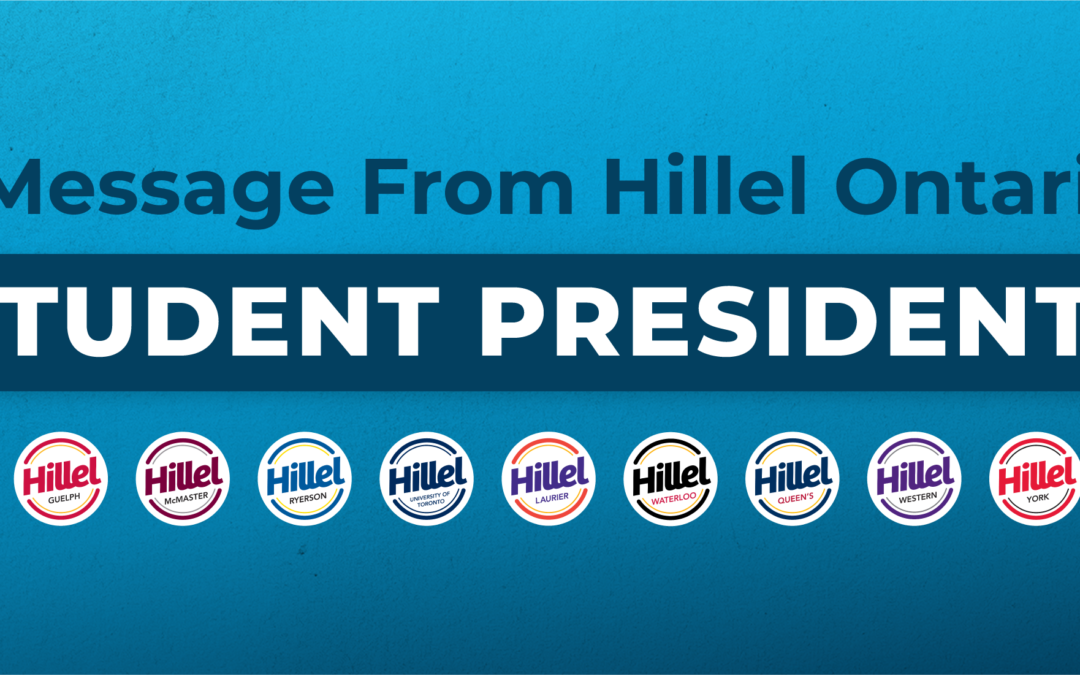 Dear students, parents, supporters, and other members of the Ontario Jewish community,

We are writing to you as the Hillel presidents representing nine universities across Ontario.

We are often asked what it’s like to be a Jewish student on campus. And, in previous years, we would have taken a more upbeat approach to answering that question. The truth is that things have changed over the past 5 months.

Prior to this spring’s war in Israel, we had never experienced the level of vitriol and backlash that we did recently. We were caught off guard. Many Jewish students lost friendships and severed connections that had been created over many years. Our mental health was stretched to the limit; we have felt burnt out, isolated and anxious.  Even now, with autumn upon us, we are still feeling the exhausting effects of a summer spent advocating for the well-being of our fellow Jewish students.

Walking back onto campus this week, it was difficult to see some students obviously (and understandably) anxious – both because of the pandemic, and because of the antisemitism Jewish students have experienced over the past several months. At the same time, we also feel more empowered than ever to proclaim pride in our Jewish identity, bolstered by the tremendous support we have felt from across the community.

Whether you are a first year student, a parent, a sibling, an alum, or simply a member of the community concerned about what seems like an endless barrage of attacks aimed at Jewish students on campus, we want to assure you that as Hillel presidents, we are deeply committed to our roles and responsibilities. We hear your concerns. And, we are proud to serve the current and future Jewish students we support.

We are working to build relationships with student governments, clubs, interfaith groups, faculty, and administrators on each of our campuses. We continue to empower our peers to learn, to educate, and to advocate for the issues close to our hearts. And, we continue to provide a safe and welcoming community for Jewish students, both on and off campus.

We also seek to increase resources and staff available to our students so that no one feels unsupported or ill-prepared. We want Jewish students to feel like they can be their entire selves without having to hide a Magen David or avoid conversations about Judaism, Zionism or Israel.

As we move into a new Jewish year and a new school year, we wish we could say with more certainty exactly what is to come in the next few months. However, it would be naive to do so. Instead, we would like to take this opportunity to commit to you that we will continue to have challenging, but necessary, dialogue with allies across campus. We will continue to support our peers when they feel uncomfortable. And, we will continue to ask for help when we need it.

Time and time again, our collective history has proven that in a proud, empowered, and united community there is strength, and that from one another we can draw resilience.