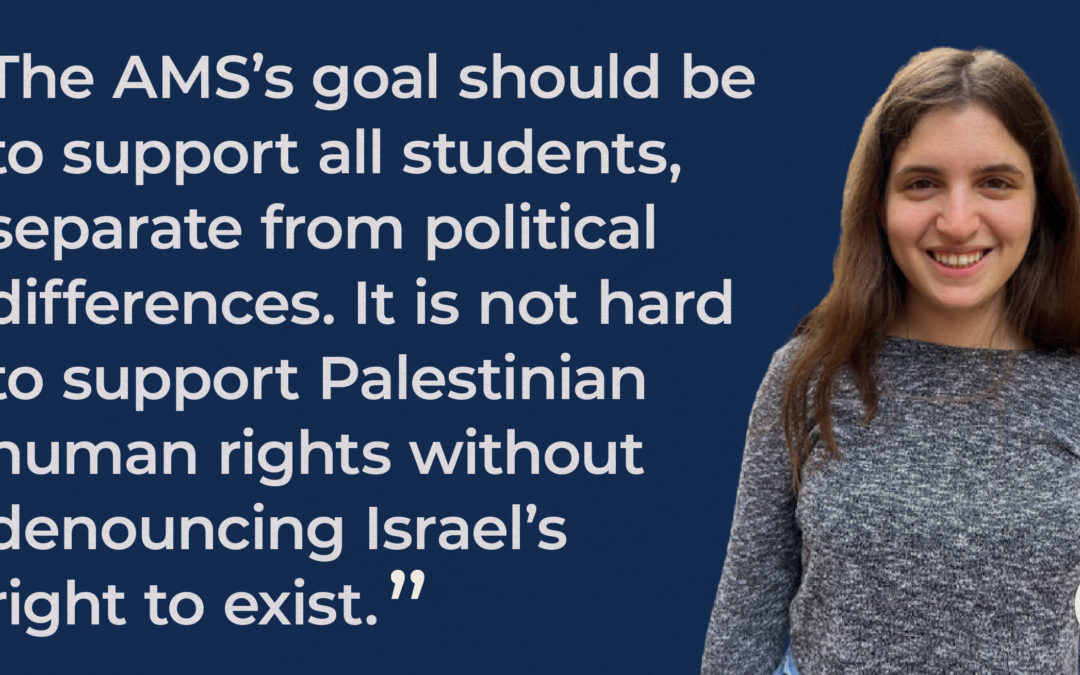 Nearly one year ago, in May 2021, during the last round of hostilities between Israel and Hamas, the AMS Executive faced a significant amount of pressure to boycott Israel and denounce its right to exist. In these moments, I wished for empathy. Empathy for the nuance of the Israeli-Palestinian conflict to be accurately represented. Empathy for both Jewish and Palestinian students with connections to the land who were facing danger. Empathy for the reality that if a peaceful solution is not on the table, innocent citizens will continue to die.

I am Jewish. I see Israel and Zionism as a vital part of my Jewish identity. I am also in support of Palestinian human rights and sometimes find myself questioning policy decisions of the Israeli government. The importance of Zionism does not overwrite or negate Palestinian trauma, co-indigeneity, or understate the importance of including Arabs in the country’s citizenry.

The AMS’s goal should be to be inclusive, give students the opportunity to learn and engage with one another over this extremely complex issue and paint a full picture of the conflict that is grounded in the historical context of genocide that has occured. The modern State of Israel was born after the genocide of the Holocaust, and its need for survival has to be understood in that context.

Moreover, it is not the AMS’s job or responsibility to take sides on geopolitical issues. Their official mandate is to, “​​serve students and advocate their interests to the University and all levels of government.” Their job is to, as their slogan suggests, support and represent the diversity of students at Queen’s. Jewish students must be included in that diversity. If the AMS feels that taking political stances should be within their mandate, I would hope that this not only apply to the world’s only Jewish state. Where were the calls for AMS to comment on the Uyghur detainment camps in China? Or about the FIFA World Cup being held in Qatar, a country rife with human rights violations?

Here’s my story, which I hope can shed some light on the complexity of the Israel/Palestine conflict.

To Jews, Zionism means support for our right to self-determination in our indigenous homeland, Israel – where I can personally trace my lineage back to the effects of Roman settler-colonialism in 70 CE, when Jews were forcibly displaced from the land. Zionism is the national liberation movement of the Jewish people, and as with all liberation movements, it can only be defined by the community that it seeks to liberate.

In the late nineteenth century, in response to the gradual emancipation of Jews in Europe, Jews began to demand the right to take control of our own destiny and be allowed to re-establish sovereignty over at least part of our ancestral lands. Somewhere we could be free from oppression and persecution, but moreover, somewhere that our people could experience a spiritual rebirth; a Jewish state and not merely a state of Jews.

Following the Holocaust and the murder of 6 million Jews, my people were finally given that opportunity to return to our homeland and establish the State of Israel. To me, this return is clearly an act of decolonization, similar to how I would view the Indigenous reclaiming of stolen land on Turtle Island. There can be no expiration date on land rights.

As a supporter of Israel, I am often critical of government decisions, just as I am of many countries’ governments – including Canada. It is not antisemitic to critique the Israeli government. It is, however, antisemitic to denounce Israel’s right to exist. To say that the solution to the conflict is to expell Jews, is clearly antisemitic, as we would never apply that same logic to other, non-Jewish states with controversial human rights records. Human rights criticism of a Muslim country does not warrant its elimination. That would be Islamophobic.

There is no simple answer to this problem, but I believe the only solution will be found in championing the rights of both Israelis and Palestinians. ‘Between the [Jordan] River and the [Mediterranean] Sea’ that we hear so much about, live millions of people who need to coexist.

Any solution that does not appeal to the aspirations of both people is doomed to fail.

I am in favour of a two-state solution, one whereby Jews and Palestinians can live in peace, in their own safe and secure states with internationally recognized borders. Where citizens do not have to live in constant fear, and where they may be able to recognize one another’s humanity and joint need for a place to call home and feel safe. To fully realize a two-state solution, we must also come to an understanding that the borders will have to be agreed upon by both sides, that there will be compromise involved and that we should not prejudge their eventual outcome.

All of this might sound like an aspirational pipe dream but perhaps that is exactly what we need. To truly transcend the bitter conflicts that have separated our peoples for more than a century, we must provide bold new visions for peace that address the fundamental issues of the conflict while not ignoring the realities in the region.

Supporting one group does not have to be done at the expense of the other. The AMS’s goal should be to support all students, separate from political differences. It is not hard to support Palestinian human rights without denouncing Israel’s right to exist.

The AMS’s goal should be to be inclusive, give students the opportunity to learn and engage with one another over this extremely complex issue and paint a full picture of the conflict that is grounded in the historical context of all that has occurred.

A simplification of a decades-long war will never bring peace or resolve to the conflict in the Middle East. Doing so demonstrates a lack of empathy for the lived experiences of all impacted Queen’s students and only serves to further polarize an already divided campus community.