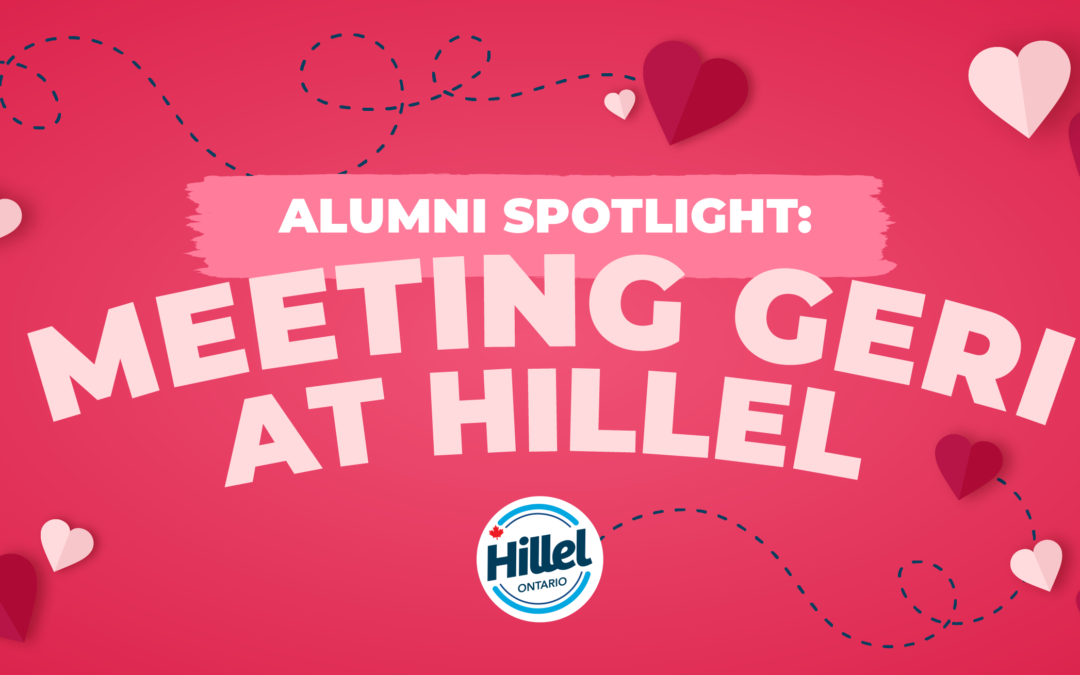 In the summer of 1967, as I was preparing to enter my first year at the University of Toronto Law school, the National Hillel Foundation (NHF) offered me the opportunity to act as the Administrator for the creation of the first Jewish Student Hillel Chapter at York University. During my undergraduate years, I had been very active with the University of Toronto Hillel Chapter. When they told me that I would receive $1,500 for this very part time job I accepted quickly.

The first meeting of the York University Chapter took place in October with more than 50 students attending. As it happened, an old friend of mine, Howard Zane became the President of this group. My task that day was to close the meeting by thanking Howard and his executive for all their efforts in creating this new Chapter.

As I was going over my intended remarks in my head, I was distracted by the noise of the door opening and closing at the back of the room. A girl slipped in quietly and leaned up against the back wall. I wondered why she would be coming to the meeting so late. She had striking red hair, and wore a brown cashmere sweater and a green skirt. My first impression was that she looked colourful, pretty and mysterious.

When the meeting ended I hobbled over to Howard to congratulate him. Because I had sprained my ankle badly a few days earlier, I was on crutches and  Howard had given me a ride to the school and would be driving me home.

As I swiveled around I almost crashed into the mystery girl. She laughed and said hello. Howard introduced her to me as his friend, Geri and told me that he would be giving her a ride home as well.

Up close, I could see she had soft blue eyes, a few freckles, and a big friendly smile. I recall that I thought she was sophisticated. By that, I mean, she carried herself confidently and wasn’t burdened by the shyness that often paralyzed me when it came to talking to girls. I liked that she was outgoing, but it also made me a little nervous.

When we approached the car, Geri came around to my side and help me lift my leg into the car. When she bent down she looked up at me with a gentle look of kindness and promise. For me, that was our first intimate moment. I liked her already, a lot.

The conversation in the car flowed easily. Geri was bright and easy to talk to. After Howard dropped her off. I asked him what he knew about her. He said, “ forget her, she’s in a long term relationship”. I only learned years later that the “long term relationship” he was referring to was the one date he had taken her on a week earlier.

I also subsequently learned that she had asked Howard about me. She had told him that she liked me and found Jewish jocks to be very attractive. He told her that I was “almost engaged” to a girl in Montreal. The truth was, and Howard knew this, that I had broken up with that Montreal girlfriend months ago.

With Howard’s admonition and my own insecurity to deal with I decided that Geri was too far out of my league and that I would move on. Still, I thought about her often and hoped to see her again at a Hillel meeting that year. She never came back.

Shockingly, about six months later, I did see her at my law school. Let me set the stage for you. I was in my first year at U of T law school. There was a third-year student named Andrew Green, who was like the pied piper. He had the top marks in both his first and second years. Whenever I saw him in the halls or in the library, he had an entourage who seemed to be hanging on his every word. And he was tall and good looking and funny. He had it all.

At the end of each year the Law school holds a moot court competition for third year students. It is very prestigious. Three Ontario Supreme Court Judges adjudicate the moot trial. The professors choose the top four students to take part, and yes, Andrew was one of them.

On the evening of the moot court, I arrived early and squeezed into a seat at the back of the room. The courtroom was buzzing. Just before the trial was about to begin, I noticed an elegant woman, with red hair, walk into the room and sit down in a seat, to the side and a few rows in  front of me.

My heart stopped. I could barely catch my breath. That woman was Geri. My god she was beautiful. Throughout the trial, I kept looking at her. I watched her laugh, and nod her head, and gently move hair away from her eyes, and touch her ear, and sigh and smile…. I couldn’t take my eyes off her. If there is such a thing as “love at second sight”, this was it for me. I was mushed.

Then the trial ended. Not surprisingly Andrew and his partner won. The judges stood. Everyone then got up to leave. My eyes were still on Geri as she stood and walked slowly towards Andrew who turned away from his fans and gave Geri a hug before they walked out together.

No way… really! I plopped back down into my seat. My whole body sagged and ached with jealousy and sorrow. I lowered my head so no one would see my anguish. I was heartbroken. I felt like I had just lost the battle and the war before I even laced up my boots.

The following Autumn, I continued my work with the York University Hillel students. Their first meeting took place on the second Monday in October. With mixed feelings, I had pumped Howard for information about Geri, but he told me he had not been in touch with her at all during the summer and he hadn’t seen her at school yet this year.

I arrived at the meeting early to help get the room set up. Every time I heard someone enter the room I looked back. The room filled and the meeting started. Geri hadn’t come. I think I was a little relieved because I had no idea if I would have the courage to talk to her, or even what to say.

It was a good meeting. The conversations were enthusiastic and loud, which is probably why I hadn’t heard Geri step in the room and seat herself at the back. But halfway through the meeting, as my head turned, I saw her. My mind started to spin and I started to sweat. I looked away. I got overwhelmed. The meeting kept going for another 30 minutes. It felt like forever. Finally, the meeting ended.

I was frozen in my seat. Geri walked down to the front, waived at Howard and then walked directly towards me. Oh my. I managed a smile, but no words. She said hi Harry. My name never sounded so important. She sat down beside me. “How have you been?” she asked.

I shot out my arms and gave her a great big kiss. Well, that’s what my heart wanted to do, but all I could do was say “I’m fine and how are you?” She smiled and talked to me with such warmth that I was able  to ease into being myself again.

I’m sure she realized I was staring at her eyes, but she didn’t comment. Then, in the middle of our small talk, I noticed she had put her hand on my hand to make a point. I melted.

As the room was emptying, I somehow found the courage to ask if she needed a ride home . There was a pause. We looked at each other, as she said, “I’d like that.”

Know another couple who met at Hillel? We’d love to share their story. Tell us!