On new beginnings: Hillel Ontario’s New CEO Offers Perspectives on the Year Ahead 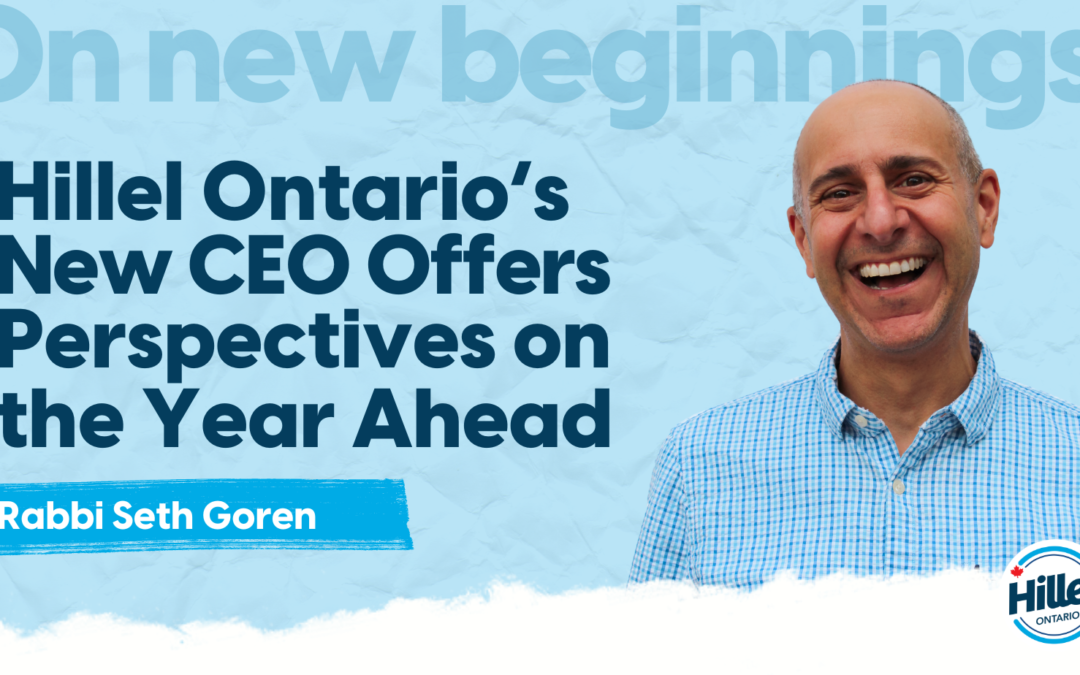 One rolling homeward to its ancient source,

One rushing sunward with fresh will, new heart.

By each the truth is spread, the law unfurled,

And both embrace the world.

At the pivot point between one year and the next, Lazarus notes the Jewish people’s relationship with both history and renewal, each of which has a part to play in our people’s future.  Today, 140 years after this poem’s composition, we, too, can remark on our relationship with Jewish continuity, and as we head into this new Jewish and academic year, I want to briefly share a bit about myself and what we’re looking to accomplish this year through Hillel Ontario.

A strong connection to Jewishness and Judaism, with an affection for Jewish history and learning, runs in my family and through my upbringing.  My paternal grandfather was a survivor of the post-World War I pogroms in Ukraine, and all four of my grandparents were actively Zionist and Jewish.  Relatives’ stories of sojourns in Canada, the United States, Israel, Russia, Nicaragua, France, Argentina, Egypt, Lebanon, and China, among other places, were integral parts of both the Jewish people’s and my personal narrative.

Jewish pluralism and navigating non-Jewish environments come naturally to me.  While I was raised in a Conservative synagogue, my extended family ran the gamut from secular to Orthodox.  Supplementing this, I attended Quaker school, which helped me understand what Judaism had in common with other faiths, how it was different, and how to articulate my own identity to people who were Jewishly unfamiliar.

Most of my post-secondary education was in the Philadelphia area.  I attended the University of Pennsylvania for undergraduate, graduate, and law degrees, studying Hebrew historical linguistics before becoming a lawyer.  While I was content with practicing law, my time in Jewish settings – teaching Hebrew school, serving on my synagogue’s board, and creating safe spaces for 2SLGBTQIA+ youth in religious settings – led me to Hebrew Union College – Jewish Institute of Religion for rabbinical school in Israel and New York.

During my final year at HUC-JIR, I did a part-time rabbinic internship at Princeton University’s Center for Jewish Life.  This experience was a reminder of how university years are a critical time in people’s lives, a period when they’re able to more freely explore what being Jewish means to them and when they often first experience antisemitism and adversity aimed at their Jewish identities.  In addition, Hillel’s pluralistic nature meant that different perspectives, practices, and philosophies were in conversation with each other, which allowed members of the community to grow and feel a sense of klal yisrael – the unity and entwined destiny of the diverse Jewish people.  This led me to centre my rabbinate on emerging adults and to prioritize making Jewishness compelling and engaging.

In 2017, my now-eleven-year-old and I immigrated to Canada, and for the past four and a half years, I have held various leadership positions with Hillel Ontario, the world’s largest regional Hillel, which serves nine universities with a combined Jewish student population of over 14,000.  It is incredibly humbling to have been selected as the organization’s second Chief Executive Officer, and I step into this role simultaneously optimistic about all we will accomplish and cognizant of the challenges to our success.

In so many ways – geopolitically, socioeconomically, environmentally, medically – we are living through incredibly difficult times.   More than two years into a global pandemic, the impact on the physical and mental health of the students we serve is dramatic.  Many of these students would, under more normal circumstances, have travelled to Israel on Birthright or similar programs and are struggling to form a loving and resilient relationship with the Jewish state.  Antisemitism is surging, and the voices of Jews, as a marginalized community, are being conspicuously excluded from equity, diversity, and inclusion spaces.

Hillel Ontario will respond to each of these challenges with an emphasis on community and relationships.  As we look ahead to the upcoming school year and the next phase of Hillel Ontario’s evolution, we will focus our collective efforts on three key themes: shaping resilient Jews; nurturing communities; and empowering advocates. More specifically, we will:

Speaking personally, my natural temperament is one of openness and collaboration.  There are more than enough people who have it in for Jews individually and as a people, and we are at our best when our relationships among Jewish organizations are at their strongest.  For this reason, when I look at this list of what we seek to do, I envision us doing it together, strengthening partnerships between our staff and our students and collaborating with our campus and community stakeholders.  As I begin this new chapter in my professional journey, I welcome your input, your guidance, and your friendship.

We find ourselves in times that offer both difficulty and opportunity, and while there may be unfamiliar and novel aspects to what we experience, Ecclesiastes 1:7 reminds us that “there is nothing new under the sun.”  By relying on our people’s wisdom and on each other, and by standing astride the Jewish past and future that Lazarus references, we can ensure that Jewish students are not only supported and safe on campus, but that they have opportunities to thrive and flourish as emerging adults and as Jews.

Please feel free to connect with me at any time and reach out to me at ceo@hillelontario.org.