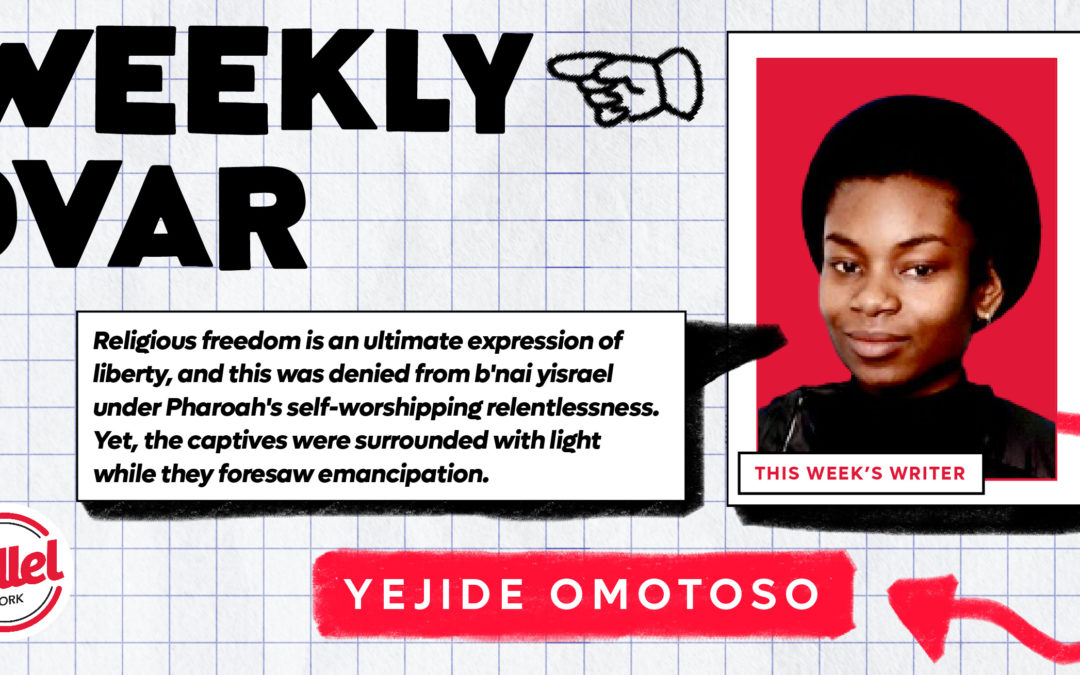 “He releases the captive and maintains His faith with those who sleep in the dust.”- Amidah  prayer, second blessing

Parashat Bo teaches us a powerful lesson about restitution and justice in recounting the emancipation of Jews from Egypt. Using a severe example of human suffering, Hashem (G-d) causes a sudden reversal of roles between the merciless oppressor and his victims at their lowest point. Misfortune becomes ingrained in the psyche of hopeless b’nai yisrael (people of Israel/Jewish people), after generations of forced labour and genocide in galut mitztrayim (exile in Egypt). It appears that G-d has abandoned His people. But amidst their intense suffering, Hashem shatters the arrogance of their persecutors, and recompenses them for their unpaid wages.

The eighth plague – a massive infestation of locusts – devoured the remnant of Egypt’s crops and greenery. The once wealthy nation had rejected Hashem as their source of livelihood, and became dependent upon slave labour to remain powerful. Hashem therefore denied them the enjoyment of unearned prosperity, while protecting the feilds of the destitute slaves who planted them. In preventing the Jews from leaving the fields to enjoy their religious autonomy, Egypt had robbed their bondsmen of material and spiritual sustenance. In response, the locusts were followed by three days of darkness – a reflection of the Egyptians’ spiritual disorientedness.
Religious freedom is an ultimate expression of liberty, and this was denied from b’nai yisrael under Pharoah’s self-worshipping relentlessness. Yet, the captives were surrounded with light while they foresaw emancipation. Amidst their approaching redemption, the Jews are commanded to ‘borrow’ costly objects of silver and gold from their masters. None of these loans were returned following their departure. This should not be seen as an act of deceit, but a simple restoration of their wages, in which G-d asserts the Jews’ status as free people.

The final plague obliged Pharoah to surrender Hashem’s servants into His custody. “Ad-nai (G-d) struck down all the first-born in the land of Egypt, from the first-born of Pharaoh who sat on the throne, to the first-born of the captive who was in the dungeon, and all the first-born of the cattle” (Shemot/Exodus 12:29). A troubling question might be asked, why were the Egyptian captives affected by the plague if they were not responsible for enslaving the Israelites? Were they not victims of slavery aswell? From this verse, the Midrash (commentary) deduces that even the most powerless in Egyptian society supported the persecution of those who were beneath them. Here, the Torah gives us an interesting example of lateral oppression, in which it teaches us that we can never benefit from harming others, even if it is to protect the little that we have. May we all overcome the delusions of the yetzer hara (evil inclination) and rely upon the open hands of Hashem.