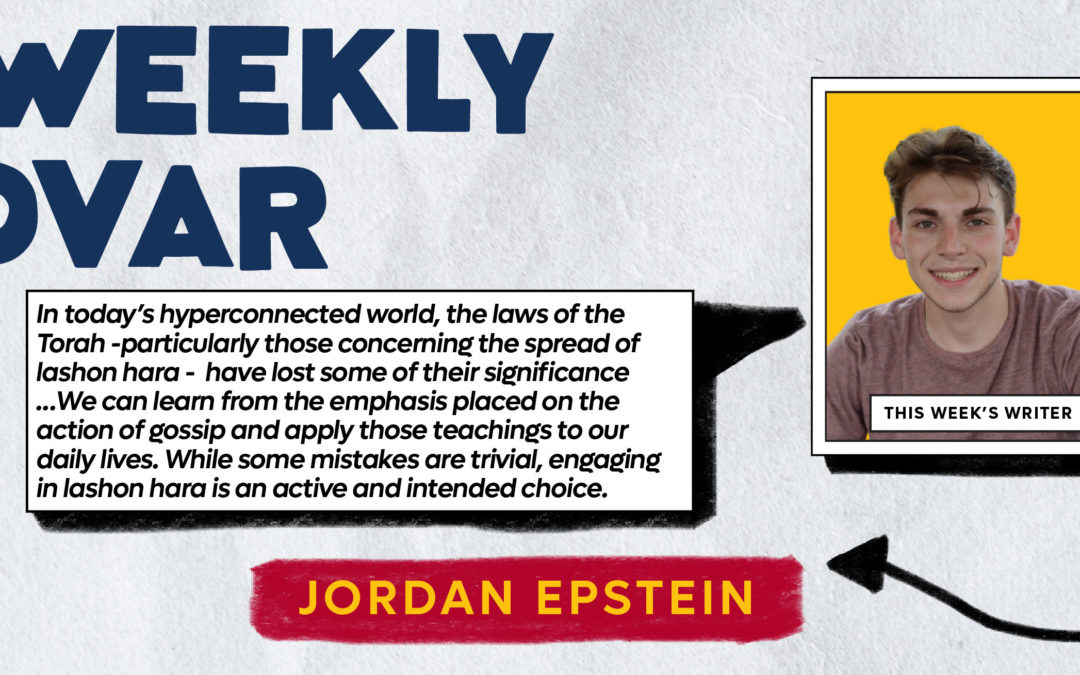 This week’s parsha is Parashat Tazria. It is the fourth parsha in the book of Vayikra and covers a variety of laws governing ritual purity and impurity. The parsha begins with a discussion of the purity status of a woman after childbirth. Right afterwards, the parsha moves into a discussion on the laws of tzara’at which, although it doesn’t have a modern equivalent, is commonly translated to mean a skin affliction akin to leprosy.  The parsha is explicit in  dictating the conditions where a person would be considered pure or impure, and the steps that must be taken to return to a state of ritual purity under Jewish law. It describes the process of a person suffering from tzara’at having to be examined by the priest who the Torah deems able to make a diagnosis of the condition.

One area that drew my interest occurred near the end of the parsha where it describes what a person with a leprous condition must do to alleviate their burden and it’s a pretty hefty ask:  They are required to shave their head, cover their mouth above the upper lip, tear their clothes, and walk out of the city shouting out “Tameh” which translates to English as “impure” for anyone who could hear them. What this amounts to for the infected person is a period of advertisement of their condition and public shaming of them in front of their community. Afterwards, they are taken out of their community and live isolated in the wilderness for a period of 7 days to ‘cure’ them of the disease. If they are able to heal, they will be allowed to reenter their community and considered to be ritually ‘pure’ again.

In Biblical times, the condition of leprosy was thought to be a punishment for the sin of ‘lashon hara’ which translates directly to mean “evil tongue” or ‘evil speech’ . This act includes sharing private information without permission,  gossiping and spreading negative commentary about another person. The destructive impact of ‘lashon hara’ can be seen in the Biblical story of Moshes’s sister Miriam, who became ill with leprosy after gossiping about Moses and his choice of a wife.

What leads to a person engaging in lashon hara? What provokes someone to share personal or negative and often hateful things about a different individual? Why enact such a breach of someone’s trust?  Throughout the Torah, there are very clear moral lines shown that centre around respect for others and yourself. The use of lashon hara is an example of the utmost disrespect and goes against all previous teachings. Lashon hara is like a mould that grows in a house when the conditions are ripe – poor ventilation, moisture and bacteria can spread like wildfire. Once a culture appears, it will rapidly spread throughout the environment unprevented unless it is isolated entirely. Even once the mould is removed, often there are stains that remain as a permanent reminder of a past exposure. No matter how hard you scrub at it with bleach, a remnant of the mould will still remain.

Lashon hara is the same. Words have immense power that is very difficult to quantify. Once spoken, the consequences of your words can have an indelible impact that far exceeds your original intent. Releasing those words to others is an action that cannot be undone, and can spread through their further conversations to many others as a result. If lashon hara is left untreated, the impact of the original message will only grow exponentially since more one immoral act sets the precedent for others to do the same. This is a dangerous environment for a community as once a culture of gossip is instilled, it is very difficult to maintain trust between community members, engage with each other in a productive manner.

This is why the Torah takes lashon hara very seriously, even going as far to dedicate an entire parsha describing the consequences of such actions. The punishment of public shaming is effective to encourage critical thought to speech in a community. The isolation for 7 days outside of the community is also important to ‘starve’ the evil speech from listening ears.  It limits the availability to learn of new gossip from people, stops the spread of past gossip by removing the ability of direct contact, and provides time for self reflection for individuals who are more prone to gossip. This has the result of not only removing gossip from the community but it further sets the tone for others to respect each other and not allow gossip to fester unabated.

It is fair to say that in today’s hyperconnected world, the laws of the Torah  –  particularly those concerning the spread of lashon hara –  have lost some of their significance. Throughout time, the Torah’s laws have been examined to determine their relevance by each generation of Jews, giving modern Jews the power to do the same. While the specific examples and laws outlined may not be as strictly followed as they were in Biblical times, the lessons of morality and their intentions are still undeniably relevant today. This is the case with lashon hara as well. We no longer have a process of isolation for those that spread gossip or the ability to fulfil this commitment as described by the Torah. Instead, we can learn from the emphasis placed on the action of gossip and apply those teachings to our daily lives. As humans we are designed to be imperfect creatures. We are prone to mistakes and will continuously make them without any effort to change our actions. While some mistakes are trivial, engaging in lashon hara is an active and intended choice.

Lashon hara is not something we can do consistently if we want to enjoy the benefits of a strong, united, and inclusive Jewish community. We must take strides to actively minimise the instances of lashon hara. Be thoughtful about your speech. Its effects may have a bigger effect on others than you realise. Have empathy during conversations. Think about how other people would like you to speak about them before you decide to do so. Remember to tell your story not anyone else’s. It’s your life, and your choices. You should be the one to dictate what gets shared, not anyone else. If we all take strides to be thoughtful and conscientious about the speech that we make about others, we will end up with a strong and healthy community that is safe and flourishing for all.