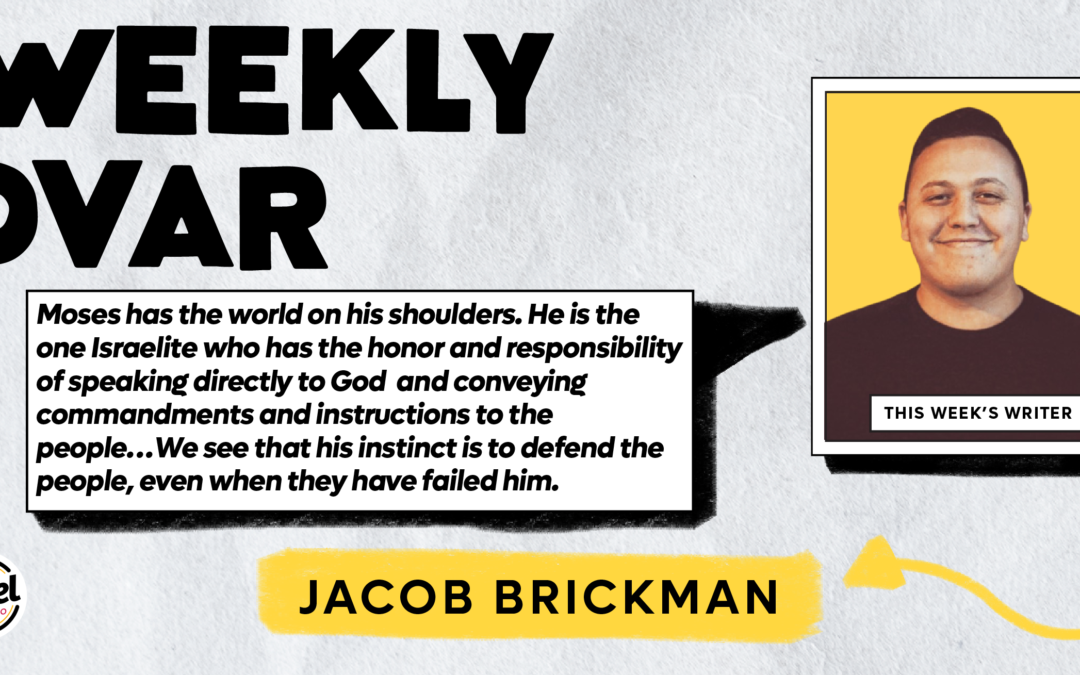 Parshat Ki Tisa is one of the longest weekly portions we read from the Torah and contains some of its best-known imagery. After forty days atop Sinai, God gives Moses the tablets containing the Ten Commandments. Moses has been on the mountain longer than the Israelites had expected and growing impatient with him, the people ask Aaron to construct a calf made of the Israelites’ gold earrings. They worship it, exclaiming that the idol was the God that brought them out of Egypt, and sacrifice to the calf and dance, eat, and drink. When Moses sees the calf, he smashes the tablets with the Ten Commandments, orders the idol destroyed and those responsible for the sin killed, which turns out to be three thousand of the Israelites.

God had proposed destroying the whole people for the sin of creating an idol to worship, but Moses pleads with God and convinces God to forgive them, but the sin will stay with the people for generations. Moses goes up Sinai with new tablets to be regiven the Ten Commandments and stays there with God for forty days again. When Moses returns to the people from the mount, he has a radiant face. Aaron and the people keep their distance. He wears a veil to cover his face, except when speaking with God or passing God’s commandments to the Israelites.

Ki Tisa is one of the times in the Torah we see displays of emotion, raw reactions and instincts, from the people, their leaders, and from God at once. The Israelites have been freed from Egypt, crossed the Sea of Reeds on dry land, and been given manna to sustain them in the desert. It is hard to imagine, with miracles of that scale in such recent memory, that forty days without Moses are enough to become so unsure as to need an idol to worship, knowing that this is expressly against the second of the Ten Commandments they have had revealed to them already: “You shall have no other gods besides Me.”

Rabbi Malkah Binah Klein discusses the lack of communication with Moses as a reason for the sin of idolatry: “There is no internet or cell phone service, or even postal service. The Israelites don’t know whether their leader is dead or alive. In this context, they create a new, tangible focus for worship: the golden calf.” It is easy to see the Israelites in this moment only as ungrateful, both to Moses and to God, but their sin may have come from fear, for their leader and intermediary with God, Moses, and a need to be closer to God, wanting a physical representation of God with them as they traveled through the desert and fought wars.

Moses has the world on his shoulders. He is the one Israelite who has the honor and responsibility of speaking directly to God and conveying commandments and instructions to the people and is the leader of thousands – possibly hundreds of thousands. We see that his instinct is to defend the people, even when they have failed him. When God tells Moses that his people have acted ‘basely’ – constructed and worshipped an idol – and wants to snuff them out, Moses implores God for mercy for them, before seeing what they have even done. When he finds out for himself the nature of the sin, not only does Moses melt back down the calf, but he grinds it down to powder, mixes it with water, and makes the worshippers drink it. He orders the Levites to “slay brother, neighbor, and kin.” The morning after three thousand of the Israelites are killed, Moses tells the people he calls ‘guilty of a great sin’ that he is going back to Sinai and hopes to win God’s forgiveness of them. His angry, reactionary outburst is harsh, but he ultimately returns to himself.

God, having seen the Israelites build and worship the golden calf, calls Israel a “stiffnecked” people and condemns them. God tells Moses that God’s anger will “blaze forth upon them” and that they will be destroyed. It is only when Moses reminds God of some covenantal history that God renounces his original punishment. He reminds God of the promise God made to Abraham: “I will make your offspring as numerous as the stars of heaven, and I will give to your offspring this whole land of which I spoke, to possess forever.” Perhaps realizing that God’s reaction to their sin, destroying the Israelites, would break God’s promise to Moses’ ancestors, when Moses is sent on his way, God initially offers to send an angel with the people and says: “I will not go in your midst, since you are a stiffnecked people, lest I destroy you on the way.” God acknowledges that because they are likely to sin again, God cannot go with them because they would be destroyed. Moses convinces God to join the people and God agrees: “I will go in the lead and will lighten your burden.”

In Ki Tisa, emotions are expressed with more intensity. It’s important to notice the situations, the circumstances that each person is in, and what they might be feeling. The Israelites’ worry and precariousness in the desert without their leader, Moses’ colossal responsibility as both conveyor of the word of God and defender of the people from God when they err, and even Aaron, forced to choose between the will of thousands of the people to create an idol and be closer to God and Moses’ and God’s instructions prohibiting such actions, are all stressful circumstances for the people in this week’s portion to be placed in. In our own lives, under enormous stress, we express our emotions in more intense ways as well; we lash out, we close off, and we say things we don’t mean. As we move into Shabbat and beyond it, may we be more understanding of others, more able to see the circumstances around others’ actions as influential, and may we see, as we are about to act, how the way we’re feeling and the stress in our life might impact others.