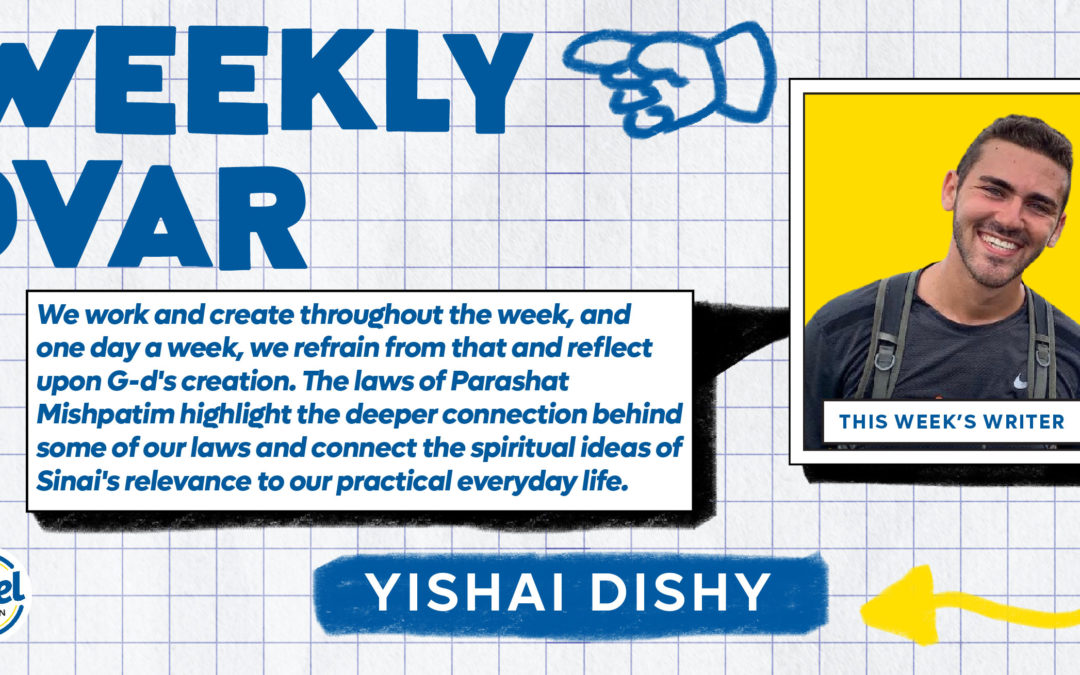 In this week’s Parsha, we were introduced to a multitude of laws, some regarding civil law, tort law, criminal law and so on, and oddly enough, we beg to ask the question, why here? Last week in Parsha Yitro, we received the Ten Commandments, and the people of Israel experienced divine revelation from G-d. The following week we see the sin of the golden calf and the continuation of this epic saga. But right in between these two pivotal stories in our history, we’re given laws about our neighbour’s stolen ox or the laws of Jewish servitude. It just seems out of place; why not hold out on giving these laws out until the book of Leviticus (ויקרא)? That is where the majority of our laws are laid out.

I’d like to propose a theory that while our laws have a practical principle to them, there is also a “higher” principle that goes beyond the text’s simple practicality. Some of the laws in this week’s parashah mirror the laws of the Ten Commandments. For example, laws regarding murder, theft, cursing one’s parents – all three of these laws are explicit in the Ten Commandments as well this parashah. Perhaps the text is trying to expand upon an already established principle and take it a step further.

The same parallels can be drawn interestingly enough from the laws of Jewish servitude. What do the laws of Jewish servitude have to do with the Ten Commandments, you might ask? They both possess the same numerical significance for starters: a Jew in servitude is required to work for a maximum of 6 years, then they are freed on the 7th, and we Jews work for 6 days and upon the 7th are meant to relinquish work for Shabbat. But why must a master release their servant after 6 years? It is intended to remind him that he isn’t a master at all; only G-d is, which is this law’s higher principle. And just as Shabbat is meant to be a testimony to G-d’s creation of the word since G-d worked for 6 days and rested on the 7th, we mimic those actions in our lives; it reminds us that we are not the creators of our world.

This gives us another look into the higher principle of Shabbat. We work and create throughout the week, and one day a week, we refrain from that and reflect upon G-d’s creation. The laws of Parashat Mishpatim highlight the deeper connection behind some of our laws and connect the spiritual ideas of Sinai’s relevance to our practical everyday life.

Thank you and Shabbat Shalom!