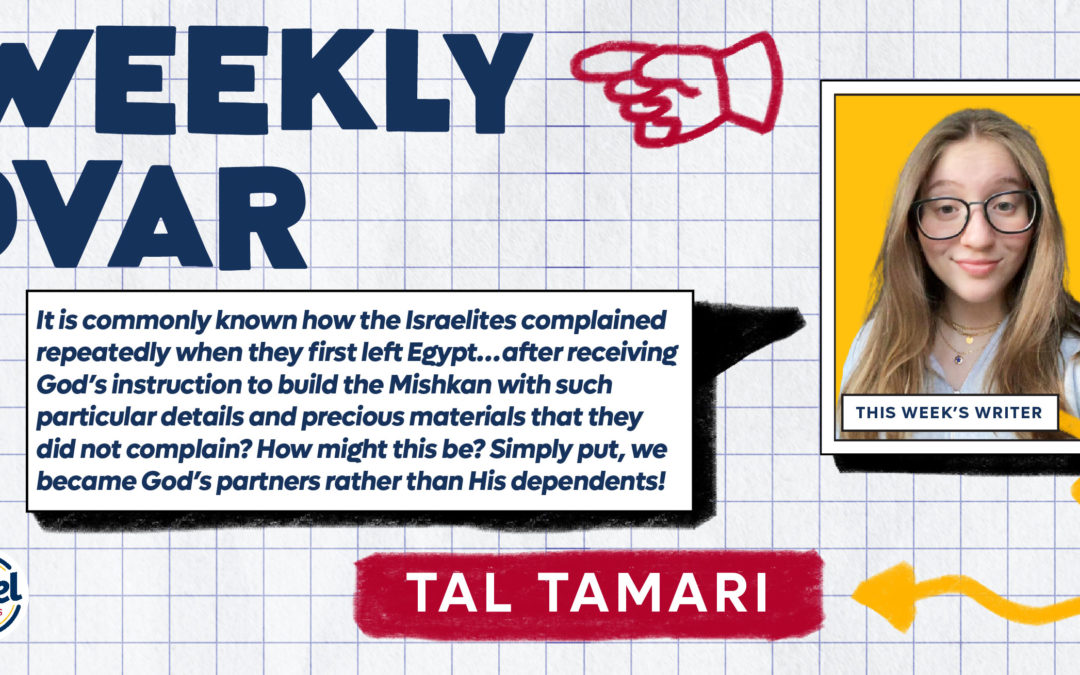 Picture it. You’ve been wandering in the desert for ages, entirely dependent on Moses and His close relationship with God for everything from the food you eat to the purpose of your people’s very existence. Moses recently returned from Mount Sinai, bringing with him two stone tablets with the 10 Commandments that you must now adhere to, setting you apart from the rest of all the other nations of the world. Enter Parashat Terumah. God, now seeking a dwelling place on earth, makes some extensive and elaborate demands of the people – build a tabernacle to house these holy tablets and conduct ritualized practices such as animal sacrifice, incense and bread offerings among others. The newly minted Jewish people are getting their first taste of an ancient Jewish religion. But God doesn’t make small demands; no, these elaborate designs are lavish, opulent and incredibly detailed. God wants the people to spare no expense in their donations – i.e. terumah – of rare and precious stones, fabrics, acacia wood, copper, silver and all the gold they could muster. He even asked for dolphin skins – in the middle of the desert! Yet, God only wants donations from those who willingly give from their hearts. For it is precisely those individuals who are ‘pure-hearted’ in their giving that God wishes to dwell among. Undoubtedly then, this Tabernacle, although only meant as a temporary until the people enter the Promised Land – is to be regarded as highly valuable and elevated in status above all other human construction – after all it is to be the dwelling place of God on earth. Thus, the Israelites are set to the ultimate test yet again — God wishes to see whether or not His people will voluntarily give up all of their precious materials (that they surely cannot replace in the midst of the desert) and build His elaborate Mishkan as a sign of their devotion to their newfound Covenant.

The late Rabbi Jonathan Sacks ZT”L offers a profound and meaningful interpretation that may explain why and how this ‘ultimate test’ has come to pass during the book of Exodus. Sacks interprets this stage in the Jewish people’s journey as one where they become a nation, a people, a group, unified through their shared identity and belief in one God. The book of Exodus is about the transformation that the Israelites experienced from when they were in Egypt, – where their shared identity was one of slavery – to reach a place where they ultimately found faith in God as the Chosen people. This transition is acutely felt in Parashat Terumah as the Israelities must rise to the challenge set by God to build such an elaborate structure. Through the donation of their possessions, skills, and hard work, Sacks argues, that they delivered on God’s demands in abundance! The building of the Mishkan was their turn to ‘step up to the plate’ and take responsibility for their role in this holy partnership.

A pact between God and the Jewish people may have been established at Mount Sinai, but this special bond was strengthened even further when God said to Moses; ‘Let them build something together’. This instruction not only solidified the relationship between the people and their maker, but amongst themselves too. Not one Israelite complained after being instructed to contribute to the building of the Mishkan, says Sacks; instead, every Israelite contributed in whatever way they could, whether by donating metals or fabrics or contributing their time and energy to building the Mishkan. It truly was a collective effort. What had happened for this change to occur? It is commonly known how the Israelites complained repeatedly when they first left Egypt, and it is also understandable as they roamed the desert for 40 years! So it is even more astonishing that after receiving God’s instruction to build the Mishkan with such particular details and precious materials that they did not complain? How might this be? Simply put, we became God’s partners rather than His dependents! “Call them not ‘your children’ but ‘your builders’” say the Sages in Brachot 64a. This transformation from relying on God for everything to becoming independent and having God rely on us to build His Tabernacle is precisely how we transformed as a people. We developed from being ‘children’ turning to God for sustenance and protection, to ‘adults’ taking on those responsibilities for ourselves. We had already developed a trust in God for all the miracles He performed, freeing us from Egypt and the parting of the Red Sea; it was now time for God to develop His trust in us so that He could ‘dwell amongst us’ within the Mishkan. As Sacks so aptly says, “It is not what God does for us but what we do for God that allows us to reach dignity and responsibility.”

The real question of this parasha then is not whether we passed this ultimate test given to us by God in the desert all those centuries ago as the answer seems clear here – we did. The real question then is whether we are living up to it now? Have we stepped up to the plate and lived up to our ancestor’s legacy? Have we stood the test of time? One might argue we have indeed. These transformative moments as experienced in Parashat Terumah have been preserved by our people over time until now. Our ancestors can rest peacefully knowing that we returned to our homeland. Jerusalem is once again a place where Jews are free to live and be proud of their identity. Our people are still very much a nation. And for those who live in the Diaspora, we have preserved the traditions that began in Terumah by keeping an Ark in our synagogues, handwriting our Torah scrolls with the utmost care, adorning them with beautiful ornaments and dressing them in embroidered fabrics among other embellishments. We learnt to elevate our sacred spaces in Terumah and we continue to do so today. Just as the Jewish people proved to God in parshat Terumah that we were up to the task of becoming God’s partners in the works of creation, so are the Jewish people continuing their ancestors’ handiwork, proving to God that we have not strayed from this path nor shirking from our responsibility. We are still committed to God and want to show this through our actions. In essence, we told our ancestors that not only will we rise to the occasion but that we would raise them one by continuing to make earth a dwelling place befitting God.