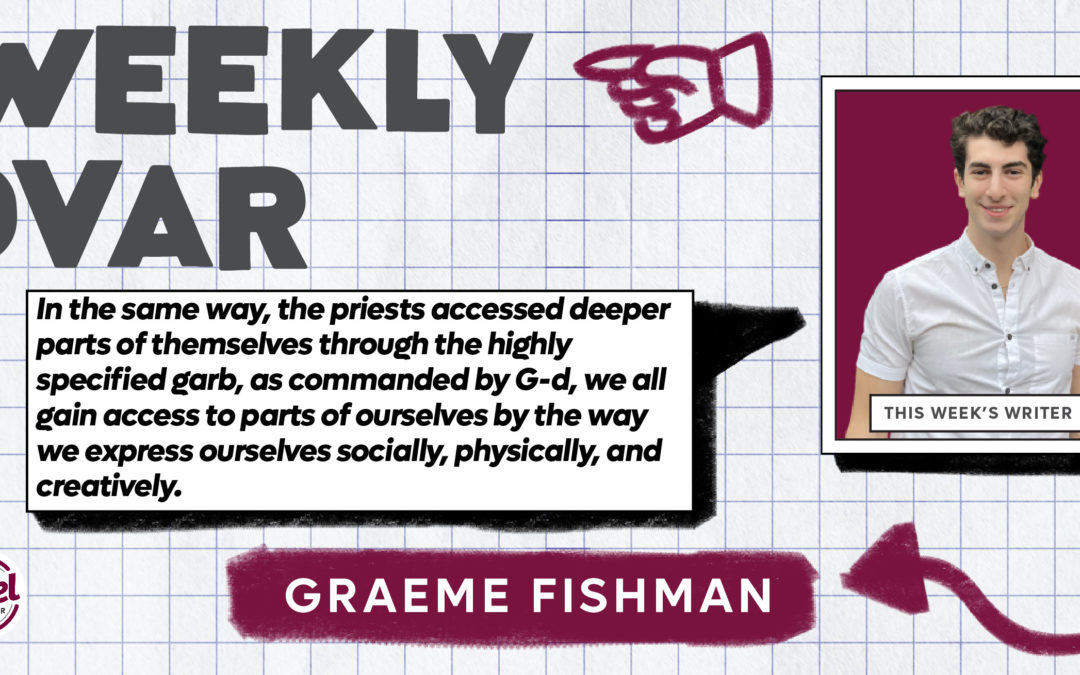 Tetzaveh, this week’s Torah portion, discusses what seems to be a relatively mundane topic: the ornamental dress of the ancient Israelite priests. The Torah portion goes into great depth regarding the details of the headdresses, tunics, and breeches commanded by G-d to be worn by the priests during their service in the Tabernacle. To make sense of the reasoning behind these particular commandments, it can help to look at our present circumstances.
Like countless others, my life was completely upturned by the restrictions imposed in response to COVID-19. Suddenly, I found myself lacking the social, physical, intellectual, and personal releases that had become so ingrained in my daily routine that I had failed to recognize them for what they were: ritual. What I had lost was not merely the ability to go to class with my friends or exercise at the gym, but rather the continuity of daily rituals that had gradually formed my identity. In reality, the minutiae, which previously seemed like arbitrary hobbies, were personal customs, a way of connecting to myself and continuously developing my identity.
Returning to the Torah, Rashi, a Medieval scholar, in his commentary on Numbers (8.3), suggests G-d praised Aaron, the high priest, for strictly following God’s commandments, particularly his deliberate adherence to the priestly dress code. Therefore, these commandments’ continuous and intentional repetition is fundamental to maintaining the Jewish tradition and identity. It is the deliberate renewal of ritual which helps us maintain who we are. The Sefer HaChinuch, an anonymous book written in 13th century Spain, stresses the importance of external markers as a cultivating force of our inward selves. “From the roots of the commandment is the principle established for us, that a person is impacted according to their actions and pursuant to their thoughts and intentions. And the priest that atones must attach all of their thoughts and intentions to the [Divine] service. Therefore, it is fit that they wear special clothes for it; as when they stare at any place of their body, they will immediately remember and be aroused in their hearts as to in front of Whom they are serving” (Sefer HaChinuch, Mitzvah 99). In the same way, the priests accessed deeper parts of themselves through the highly specified garb, as commanded by G-d, we all gain access to parts of ourselves by the way we express ourselves socially, physically, and creatively.
There was no coincidence that the pictures of overbaked sourdoughs or running map screenshots flooded social media. If you posted some of these yourself, you might have some insight into their significance; being disconnected from the hobbies and traits that previously formed our identities forced us to seek new ways of filling that niche. While personal exploration is not a bad thing by any means, the eventual waning of these newfound hobbies suggests one thing: they were temporary, probing activities, evidence of people attempting to replace old rituals with new placeholders. Like many, I found the only things that could adequately fill the void were the things that were lost. Without the activities and opportunity for expression that had previously made me who I was, I had little to connect with.
My hobbies are not analogous to the rituals that allow for the preservation of Judaism: this is not my point. What both my experience with the COVID-19 pandemic and Tetzaveh reveals, though, is the importance of paying attention to the minutiae that comprises our personal rituals. We preserve the customs and behaviours that make us who we are by careful appreciation and acknowledgement of these details.