Toronto, ON – Last night, at its monthly meeting, the University of Toronto Graduate Students’ Union General Council rejected a bid to create a permanent Boycott, Divestment, and Sanctions (BDS) standing committee. The motion failed by a margin of 27 in favour to 34 against, with 17 recorded abstentions.

The passing of the resolution would have established anti-Israel activity as a main function of the Graduate Students’ Union, with equal standing to its policy, finance, and environmental justice activities.

“We commend the General Council for taking a strong stance against discrimination and the stifling of academic freedom,” said Rob Nagus, Director of Hillel UofT. “It is astonishing that the Graduate Students’ Union continues to misuse student funding to pursue a biased, one-sided political agenda that alienates many Jewish union members.”

“The Graduate Students’ Union has taken a step in the right direction,” said Sara Lefton, Vice President of CIJA Toronto. “The vote aligns with the recent policy adopted by Universities Canada that prohibits discrimination based on place of origin, as well as with the University of Toronto administration’s strong position against academic boycotts of Israel. CIJA will continue to support Hillel in mobilizing students against BDS.”

The Centre for Israel and Jewish Affairs (CIJA) is the advocacy agent of the Jewish Federations of Canada-UIA.

Hillel strives to inspire every Jewish student in Ontario to make an enduring commitment to Jewish life, learning, and Israel. 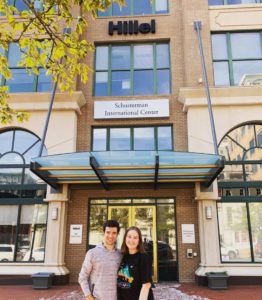