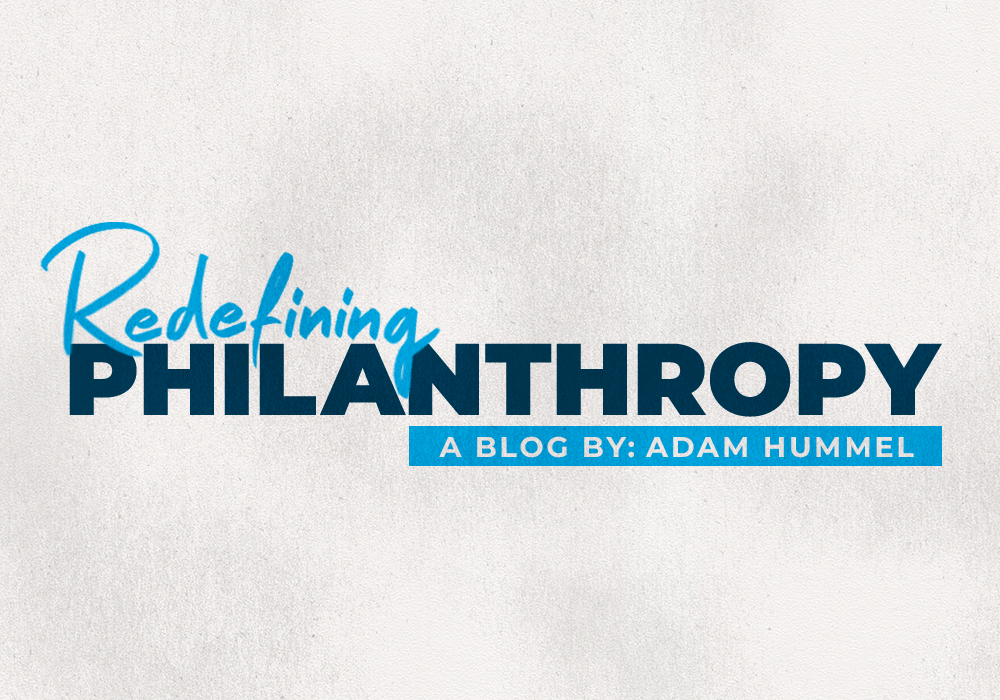 The word “philanthropy” or the title “philanthropist” is often attributed to the mega-wealthy. To be called a philanthropist these days seems to connote that one has really made it in this world – but should that really be the case?

If you consider where the word “philanthropist” comes from, it is a translation from the Latin for “lover of humanity.” That’s certainly an admirable title, but why should a lover of humanity only be able to demonstrate that love of their fellow human beings by the amount of money that they are able to donate at any given time?

I think it’s time the title of philanthropist be taken back, or at the very least be redefined to include not only those who give of their money, but who in fact give of whatever they can.

You may be thinking: who cares what it is called? Giving is an altruistic act, and as long as I’m giving to worthwhile causes, that’s all that matters. And I’d tend to agree with that thought. However, I think that putting a title on something, or even reclaiming a title as socially impactful as that of a ‘philanthropist’, may go a long way in not only reminding people how great it is to give, but also to help them remember why they are giving: a love of humanity, and a love of other people.

I also believe that this is an important way to frame the act of giving because if you simply wait to give until you reach the level of “philanthropist” as it is generally understood, as a millionaire or billionaire, then most of us will be waiting far too long to begin making an active contribution to our community. You can start right now.

There is an interesting line from the American Declaration of Independence that goes, “But when a long train of abuses and usurpations, pursuing invariably the same object, evinces a design to reduce them under absolute despotism, it is their right, it is their duty, to overthrow such government and provide new guards for their future security.” 18th century English in 2019 (and totally stripped of its historical context) I believe, means the following: when you have the ability to take action, you have the responsibility to take action.

Now perhaps billionaires realize that they have the ability, on account of their wealth, to make massive donations and have wings of hospitals named after them, and this is admirable and wonderful. But if the majority of us are waiting for such wealth, we won’t take those first steps. If, however, we realize that we have the ability to take action – through either our normal-person paycheques or simply by our ability to physically do something – then we should similarly feel empowered and responsible to take action and do something good for someone else.

Philanthropy is therefore about being able to demonstrate our love for others in whatever way we are able to do that. I would encourage whomever is reading this to think about what they can do to help someone else and to go out and try it. If it is donating, or fundraising from others, or collecting cans for a food-drive or helping someone cross the road, go out and do it. Not only will it make you feel better about yourself, but it will make an immeasurable impact on someone else’s life.

Hillel the Elder famously stood on one foot and summarized the Torah as “What is hateful to you, do not do to your fellow.” In the obverse, this can also be understood as echoing the ethics of reciprocity, which teaches us to “love your neighbour as you love yourself.”

Speaking of Hillel, one such way to make an impact is through Hillel Ontario. The Hillel organization worldwide has always played a role in empowering students to make positive changes to their communities, and also ensuring that they need not look too far to find a worthy cause to which to contribute. Through its initiatives, Hillel has always encouraged students to make an impact far greater than themselves, whether it is through simple acts of welcoming new students to campus, or making actual financial contributions to the organization to ensure that such engagement continues.

With Out of Sync, Hillel is once again demonstrating its commitment to both the values and practices of philanthropy. Through their fundraising work within the organization, students will be able to not only make a financial impact, but may even be selected to participate on a UJA Genesis/IsraAid service trip to Dominica in May 2020, which takes the action of philanthropy from the abstract into the tangible. Volunteering overseas, just like volunteering within one’s own community, shows a significant level of dedication to helping others. Out of Sync successfully brings Hillel Ontario closer to its mission to ensure that every student makes a connection to Jewish life, learning and Israel.

Hillel is built on values of inclusivity and anti-hate, educating younger generations and a dedication to lifelong learning. It is important that we continue to share stories and difficult conversations. As Elie Wiesel said: “Only in remembering what happened to us, can the world assure that it will not happen to others.” Hillel Ontario’s nine…

Shanah Tovah! We hope your Rosh Hashanah was surrounded by friends and family, and lots of delicious apples and honey! As we enter 5780, staff and students across Hillel Ontario took the time to reflect on the past year and make resolutions for the new year.   “Our resolution for 5780 is to interact with…