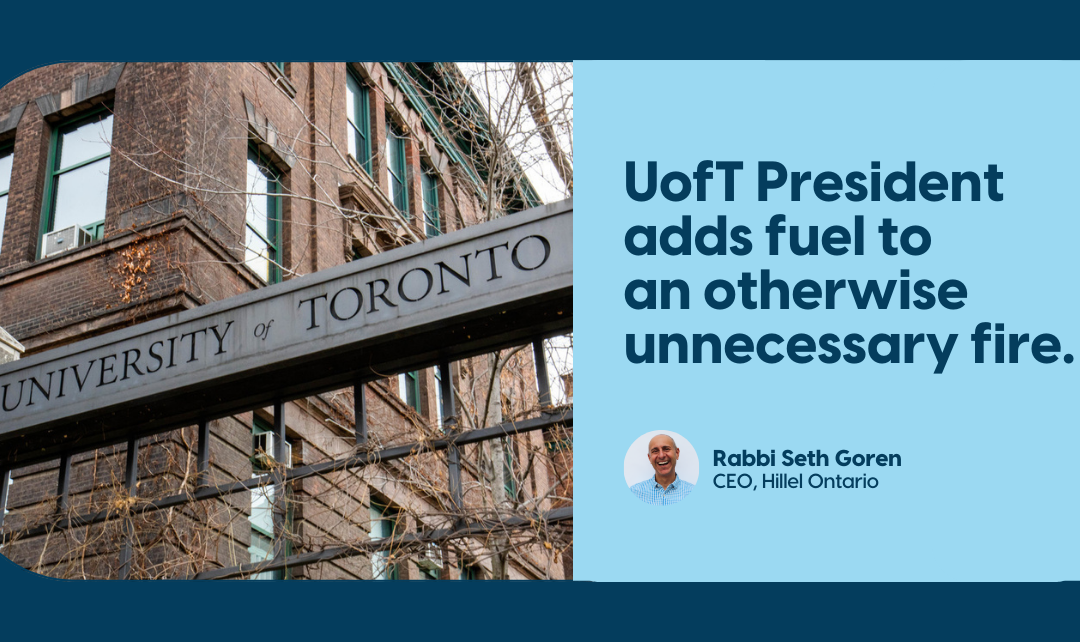 While I applaud President Gertler’s condemnation of antisemitism in “The remedy for controversial speech is more speech,” much of his opinion essay left me distressed, angry, and perplexed. As an example, Recommendation 3 in the Report of the University of Toronto Anti-Semitism Working Group advises that the university “should not adopt any of the definitions of anti-Semitism that have recently been proposed”; President Gertler goes beyond the scope of his committee’s recommendation and singles out the IHRA definition, among the several definitions the Working Group considered, as especially unworthy of endorsement. The fact that he does so in such a blithe and casual manner only adds fuel to an otherwise unnecessary fire.

But frankly, the particular definition one chooses in the context at hand is largely irrelevant. The experiences Professor Kuper lays out from her time at the Temerty Faculty of Medicine reflect a systemic and pervasive antisemitism, regardless how one might take the term. Accusations that Jews control faculty hiring and promotion, as well as the Canadian Residency Matching Service, do not require a sophisticated, nuanced, international-consensus definition of antisemitism to conclude that they are, in fact, antisemitic in nature. Arguing against IHRA in this moment at best misses the point; if one were to be less charitable, it can be seen as an attempt to shift the conversation away from the adversity and opprobrium Jews face at the university and the school’s failures to adequately address them onto what is perceived as friendlier terrain for engagement.

Professor Kuper’s reflections are far from isolated cases, but rather resonate in the stories we hear from other Jews at the University of Toronto day in and day out. Readers may be familiar with some of the more public and egregious headlines, such as the UTGSU’s resistance to supporting kosher food on campus; this is merely the tip of the iceberg. Jewish members of the U of T community often face an ongoing and interminable barrage of antisemitic encounters, small and large, from both their peers and those who hold power over them. This regular grind of aggressions, whether micro or macro, can effectively keep Jews out of spaces where they should be welcome, elicit a permanent stance of justifiable defensiveness, and take a toll on mental health and wellbeing.

Taken as a whole, these narratives indicate that the University of Toronto’s approach, from apologizing for decades-old wrongs to condemning antisemitism when particular instances reach the administration’s attention, is not working. Different strategies – ones that are grounded in mainstream Jewish community perspectives, that have demonstrated effectiveness, and that integrate Jewisness into the range of identities that are justifiably supported and defended – are required, and defending current tactics or holding them up as adequate and resoundingly successful is misguided, counterproductive, and baffling.

Contrary to what President Gertler suggests, there is no inherent contradiction between accountability for purveyors of bigotry and intolerance and serving a critical societal role as a bastion of free speech and expression. Even IHRA, of which he is clearly unenamored, states that “criticism of Israel similar to that leveled against any other country cannot be regarded as antisemitic.” Pitting them against each other as if they are mutually and necessarily exclusive presents a false choice and does us all a disservice. It is possible, with determination and collaboration, to devise practicable ways of attaining both of these goals and building a campus climate that does not radiate hostility, fear, and disgust towards Jews or any other equity-deserving groups.

The Jewish community, and the Jewish campus community in particular, wants to be the administration’s partner in finding solutions that both dismantle the antisemitism that is endemic to many parts of the University of Toronto and honour the special role that debate, innovation, and learning play in fostering intellectual exploration and conversation. Articulating and implementing those solutions is realistic and attainable, but requires a good faith effort to centre Jewish voices and experiences in the conversation, to listen to our concerns, and to take concrete steps that improve the lives of Jewish students, faculty, and staff on campus.

It is important to acknowledge that U of T is not a monolith and that some individuals and departments actively seek to support Jewish students and the campus Jewish community. Key allies, including professionals at the Multi-Faith Centre, the Anti-Racism and Cultural Diversity Office , and the Office of Student Life, strive for inclusion and take affirmative steps to reduce Jewish marginalization. Strong institutional partnerships and cultivating relationships like these are essential to progress and positive change. Indeed, we believe in our work and its importance and take tremendous pride in the nurturing community and enriching initiatives we provide for Jews at the university. That said, an archipelago of segregated spaces for Jewish life scattered across the expanse of St. George, Mississauga, and Scarborough clearly does not meet even the most reasonable of expectations, and leadership on this issue must come from the administration’s senior-most actors.

I may sound frustrated, aggravated, and agitated. I am all of these things and more. These disagreements are more than academic, and I know too well the very real impact this environment has on the lives of Jews affiliated with the University of Toronto and Hillel U of T staff who are there with and for students every day. We have reached a point of exasperation with the university’s seeming inability to confront antisemitism in a meaningful, sustained, and comprehensive manner. While we hold out hope that the administration will take action that improves the conditions facing Jews on campus, doing so demands a significant change of course and a dedicated commitment to equity and justice.

In truth, dismantling antisemitism and aiming for mere tolerance is too low a bar. Jews at the University of Toronto have a right not only to protection against antisemitism, but to a warm, supportive environment that celebrates their Jewish identities, welcomes their Jewishness along with all of the other aspects of their persons, and encourages Jews to bring their full selves to interactions, conversations, and learning. We remain ready to work with the university to advance shared goals of equity and inclusion, to put an end to the repugnant intolerance and ignorance that Dr. Kuper and many others have brought to light, and to ensure that the university is the inspiring and affirming place we know it can be.

Rabbi Seth Goren is the CEO of Hillel Ontario, which serves nine Ontario universities with a combined undergraduate Jewish population of 14,000.